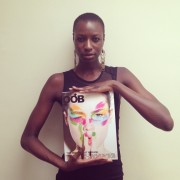 From Mali and Senegal, Nala started her modelling career in Paris 2010.

She started working for different luxury magazines and became one of the muse of the campaign for the brand “Make Up Forever”. Quickly, many different designers from London, Berlin and Paris brought her onto the fashion catwalks. You will be able to see her grace and long legs on catwalks such as “On Aura Tout Vu”, “Martin Grant”, “Yiquing Yin”, “Julien Fournier” and many others…

In 2012, Nala starred in her first movie role, a French movie called « 20 ans d’écart » with “Virginie Effira” and “Pierre Niney”. But it’s only the beginning of her long and successful career!

We can already tell you that she’s currently working on other movie projects, but shush! It’s a secret…

Nala, fresh and full of energy, joins the OOB team as a reporter…  Who better than her can reveal all of the backstage catwalk secrets?!