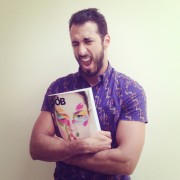 Nabil Harlow, was born and raised in Paris, but became a citizen of the world at the age of 17, when Karin Models spotted him and he started his modelling career.

He kept travelling and booking work through his agency for international campaigns and fashion shows.

But Nabil wanted to start following his true passion as a hairstylist.

After many years of training in colouring and hair styling, Nabil decided to take his talent to New York. Along his journey he met the famous makeup artist Frank Guyton who gave him the opportunity to work with many celebrities.

Nabil’s career continued to flourish when he met hairstylist John Nollet who believed in his talent and hired him as the brand manager of all the John Nollet’s salons in Paris.  John introduced him to the movie industry and actors quickly became clients and close friends.

Nabil continues to follow his passion as a hairstylist and is grateful his dream allows him to travel around the world.