“Who can take tomorrow, Dip it in a dream, Separate the sorrow and collect up all the cream The Candy Man, The Candy Man can, ‘Cause he mixes it with love, And makes the world taste good”
(Bande son : The Candy Man by Sammy Davis, Jr. Album “Sammy Davis Jr. Now”)

Macarons and me : an endless love story.

With Pierre Hermé , to the wonderful taste is always added your pleasure viewing. This, for all pastries , including macarons … Having no resistance to temptation , I swooned before the macaroons  » Infinitely Vanilla  » and my senses were flying for metal powders which gave the impression my fingers to be light butterflies .. Yes, but …

Too much ganache undermine the ganache. Mr. Hermé is really generous with his ganache fillings … I was left with a negative impression and I admit, I snubbed the pastry for a while.

Wrong idea. « THE » macaron is an endangered specie, Mr. Hermé is one of its strongest supporters …

Also , while I was walking innocently (well.. Meaning walking nose up in the air on the Parisian cobblestones .. And yes , it is less glam said like that.. But so much more realistic !) I came across a Hermé pastry, and who knows how my steps led me inside.. 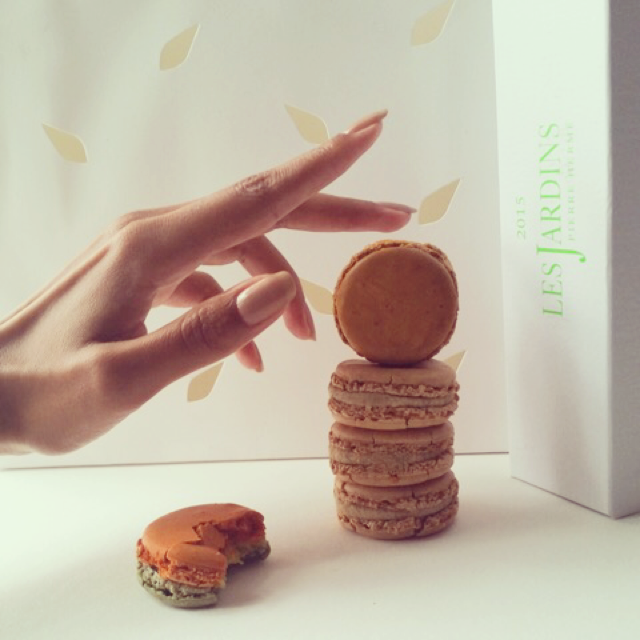 Imagine this double meringue matcha / sesame. The bitterness of matcha grows quietly until crisps of little sesame seeds come explode in the mouth..And , just before reaching the heart of the macaron there is a raw and flavored matcha ganache .

Yes, I know , I have simple tastes, that, after a walk in one of his pastries , I’m sure you will share …