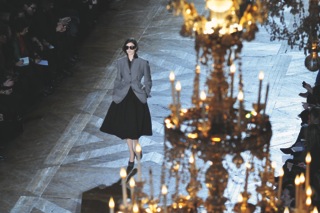 Dries Van Noten revealed his very first exhibition at the Musée des Arts Décoratifs in Paris. The Belgian fashion designer sheds light onto his creative process where he illustrates the diverse and abundant sources of inspiration to create his men’s and women’s ready-to-wear collections. Van Noten’s brilliantly colorful ensembles are pieced together with iconic pieces from the museum’s fashion and textile collection. Photographs, videos, musical references, and artworks from renowned artists that have stimulated Van Noten’s imagination are also showcased in the exhibition. This project acts as an invitation to take an intimate journey through Van Noten’s personal universe and creative process.

“Inspirations” encourages us to ask ourselves what it means to be original in today’s world. Photographs, movies, music, and cultural references have completely saturated the Internet now more than ever. Where does an artist find his or her own voice? Van Noten’s exhibition illustrates that not only is it okay to be influenced by what others have done before, it’s also absolutely normal. 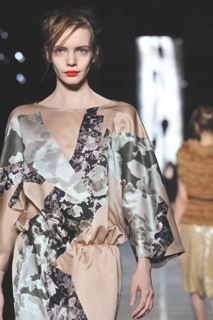 “What I do is neither a photocopy nor an homage. It is all about being inspired by someone else’s work and transposing it into a different setting, an operation that is as subjective as it is personal. The aim is to link different elements together,” Van Noten stated.

The first notable inspirational connections we witnessed were the fragments of pages and ripped magazine clippings from Francis Bacon’s atelier. These served as inspiration for the floral motifs in a fanned paper dress that Van Noten created. From the literal scatterings in Bacon’s atelier to Bacon’s actual paintings, designer Van Noten was intrigued by the artist. Bacon’s work is enticing and terrifying, which is the very reason why Van Noten was so fascinated by the strained intensity of the body in motion in one painting. 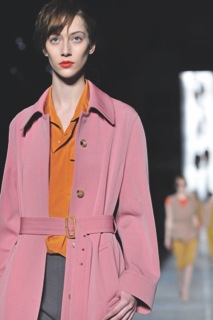 “The elegant strength and passion of flesh overlap and merge, eliciting conflicting sensations of grace and shame,” reads Van Noten’s exhibition notes. The designer also toyed with the beiges and pinks of one of Bacon’s paintings to define the color palette for his Women’s Fall/Winter 2009 Collection.

Following the thread of vibrant color, the exhibition then highlighted “Butterflies.” Van Noten’s garments are a strong combination of fierce passion and curiosity, consistently wavering between beauty and cruelty. We sensed the ephemeral nature of youth in the fleeting existence of Van Noten’s butterfly inspiration.

Major films, including Stanley Kubrick’s Clockwork Orange and Jane Campion’s The Piano are part of the exposition. Van Noten explored the strictness of women’s garments in the Victorian era that studies romanticism and questions the limits of what is usually considered beautiful. The North Sea’s hazy skies blurs silhouettes while shells stick to fabrics.

The exhibition took a turn for all things graphic as we traveled deeper into the museum. Rendering the two-dimensional into three-dimensional forms, Van Noten gathered inspiration from optical illusions for past collections and his most recent Women’s Fall/Winter 2014 Show. He was moved by the visual rapture and strong graphic works of Victor Vasarely, Pol Bury, and Mark Rothko. 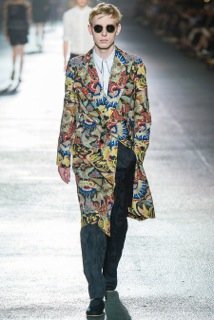 In addition to womenswear, Van Noten is a pioneer in refined menswear. He challenged the boundaries of the masculine wardrobe by creating unisex garments and utilized the eccentricity of Jean Cocteau and David Bowie to transcend gender in fashion. These icons’ progressive elegance revealed how fashion is taken to redefine established masculine conventions.

As we made our way to the second floor of the exhibition, Van Noten transported us to “The Garden” of his mind. Wardrobe blooms into bouquets of flowers and collections are reminiscent of enchanted forests. Leaves and rose buds adorn fabrics. We were overwhelmed with the intense colors and the pure balance between garments’ energy and finesse.

In the same “The Garden” section, Van Noten dabbles in Sport Couture where flowers interplay with the body in movement.

In addition, camouflage is explored by using the details of the rich forest to not conceal the body, but to expose it. Camouflage becomes luxurious decoration – a dance between textures, shadows, and materials.

Dresses of delicate feathers are a part of “The Garden,” reminiscent of tropical birds. There are unforeseen juxtapositions that arise from medleys of flowers, colors, and textures. Van Noten’s imagination is clearly a playground of joyful and exuberant artistic delights.

Van Noten’s collections echo his fantasies of exotic places stemming from his imagination. He finds inspiration from ethnic and folk traditions of India, China, Africa and Mexico. The intensity of these countries’ colors, scents, and symbols paints an expansive landscape that rejoices pure creativity and bold possibilities. 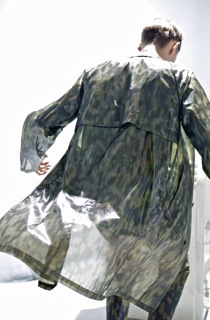 Van Noten’s first exhibition is a visual feast of inspiration drawn from cinema, literature, art, culture, and nature. Not only do we have the opportunity to tap into the designer’s mind and take an exclusive behind-the-scenes look, we also understand his own interpretations between art and fashion. Dries Van Noten is undoubtedly one of the most creative innovators in fashion today.