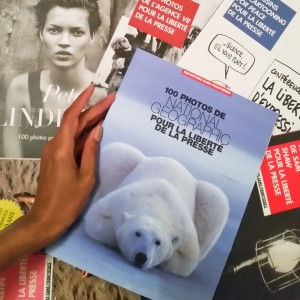 « This text was written on January 03rd, 2015. The author did not wish to change it regarding to the events of January 07th, 2015. Events that proof that fighting for freedom needs to be tirelessly, in every moment and in every place of the World . His humanity is crying. »  OOB Mag

There are people who talk about is taking pictures.
No matter what.
Besides, it’s not for nothing that the greatest of the photo have tried all kinds of pictures. Richard Avedon is a perfect example.

So, we can logically move from Elle, VOGUE, OOB to Reporters Without Borders’ albums that offer you each time 100 photos.
The latest, released December 4, 2014, reveals a National Geographic selection with a big white teddy cov. For we are in winter. So snow, ice, bears. Santa Claus tried to spoil the shooting but was taken into flag and sulks with his elves without a corner.

RSF is over from all that prevents people from speaking, writing, photographing, singing, to choose, to dance. To be free. To be and stay alive.
This is also an opportunity to discover or rediscover the work of the great names of fashion photography, Lindbergh, Issermann, Newton, Sieff, Rheims
That of artists like Ai Weiwei, Martin Parr,
Or that of photojournalists as Burry, Mc Currry, Pellegrin, Caron, McCullin, Cartier-Bresson, Capa ..

And do not forget that in 2014, 119 journalists were kidnapped,66 killed in an attempt to stifle freedom of expression.